On Saturday, August 28, 2021, the Reclaim Plastics team set up a booth at the PNE in Vancouver and spent the day educating passers-by about the incredible amount of waste that is generated across BC every day through automobile collisions and end-of-life vehicles. With 200,000 end-of-life vehicles being discarded each year in BC, and an average of 850 car accidents across the province each day, more than 80 million pounds of automotive plastics builds up. This is the exact problem that Reclaim Plastics is working hard to address.

Who is Reclaim Plastics?

Reclaim Plastics is a Burnaby-based recycling facility that specializes in recycling automotive plastics. Automotive plastics become waste either when a vehicle reaches the end of its life or when a vehicle is damaged in an accident. Through the recycling process, Reclaim Plastics generates regrind material, which can then be used to create a variety of new plastic products. Examples of these products include agricultural tools, landscape edging, flower pots, and even new car parts. Reclaim Plastics currently sells this regrind material to local manufacturers to aid BC’s growing plastics circular economy. 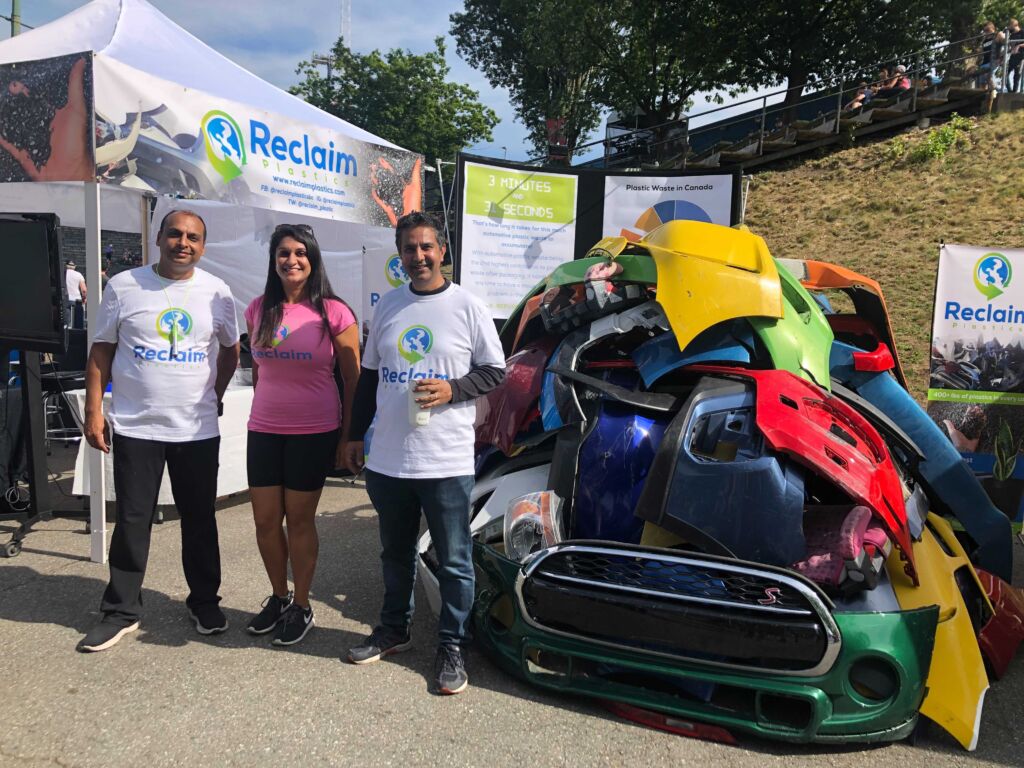 Some of the Reclaim Plastics team next to a pile of damaged car bumpers to be processed for recycling.

Reclaim Plastics is currently expanding its processing capabilities in order to alleviate the current manual and labour-intensive work required to decontaminate automotive plastic parts. The funding received from the CleanBC Plastics Action Fund that Alacrity helped administer earlier this year will allow Reclaim Plastics to invest in innovative technologies to streamline their recycling process and produce more PCR plastics than ever before. 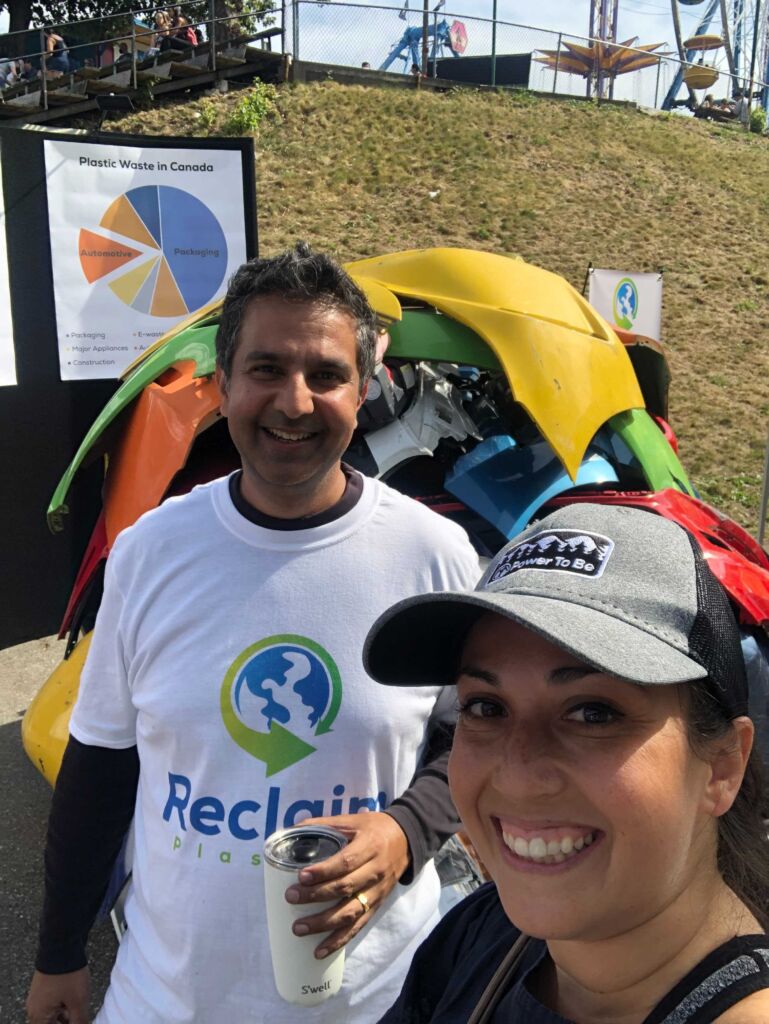 Al Boflo of Reclaim Plastics chatting with one of Alacrity’s team members during the PNE exhibition.

Reclaim Showcases at the PNE Fair

In 2019, Metro Vancouver issued a disposal ban for auto bodies and parts, acknowledging that car parts, such as bumpers, can be recycled. While this disposal ban remains in place, it is currently not being enforced by the municipal or provincial government so the automotive plastic waste issue remains unsolved.

At Reclaim Plastics’ exhibition at the PNE, attendees bore witness to a display of more than 600 pounds of automotive plastics waste. This amount of waste currently enters BC’s landfills every three minutes and fifteen seconds.

While at the PNE, Reclaim Plastics also met with Mike Hurley, Mayor of Burnaby, Richard Stewart, Mayor of Coquitlam, Lisa Dominato, City Councillor for the City of Vancouver, and The Honourable Raj Chouhan, MLA of Burnaby-Edmonds. Reclaim Plastics invited these local politicians to their booth to teach and inform them about the current automotive plastic issue in BC, with the hope of eliciting change.

While the Reclaim Plastics team received lots of feedback from the general public and passers-by, one of the most common reactions was that of “disgust” at seeing just how much waste enters landfills each day. Seeing the public’s genuine shock and horror at the sheer amount of automotive plastics that are discarded each minute in BC serves as continual inspiration to keep the Reclaim Plastics team fighting for change.

Next Steps for Reclaim plastics

Reclaim Plastics is excited to expand its operations across BC, including into Metro Vancouver, the Interior, Vancouver Island, and Northern BC, through promising partnerships with auto body shops and insurance companies. In addition to automotive plastics, Reclaim Plastics is also expanding its recycling capabilities to include car seats, pharmaceutical bottles, and plastic crates.

While Reclaim Plastics already has some long-standing relationships in place with partners such as with Craftsman Collision, they are always on the lookout for new partners to aid in their work. In addition to partnership development, Reclaim Plastics is raising awareness about the larger issue of automotive plastics waste in order to generate the requisite political will to enforce regulations and policies that will make it mandatory to recycle this form of plastic waste.

Learn more about the company and their work by visiting the Reclaim Plastics website or get in touch with them via email.

Looking for more updates on the CleanBC Plastics Action Fund recipients? Find a recent series of posts on the Alacrity Cleantech Twitter and LinkedIn accounts with updates on each project.

On Monday, August 9th, the Intergovernmental Panel on Climate Change (IPCC) released the first part of their sixth...