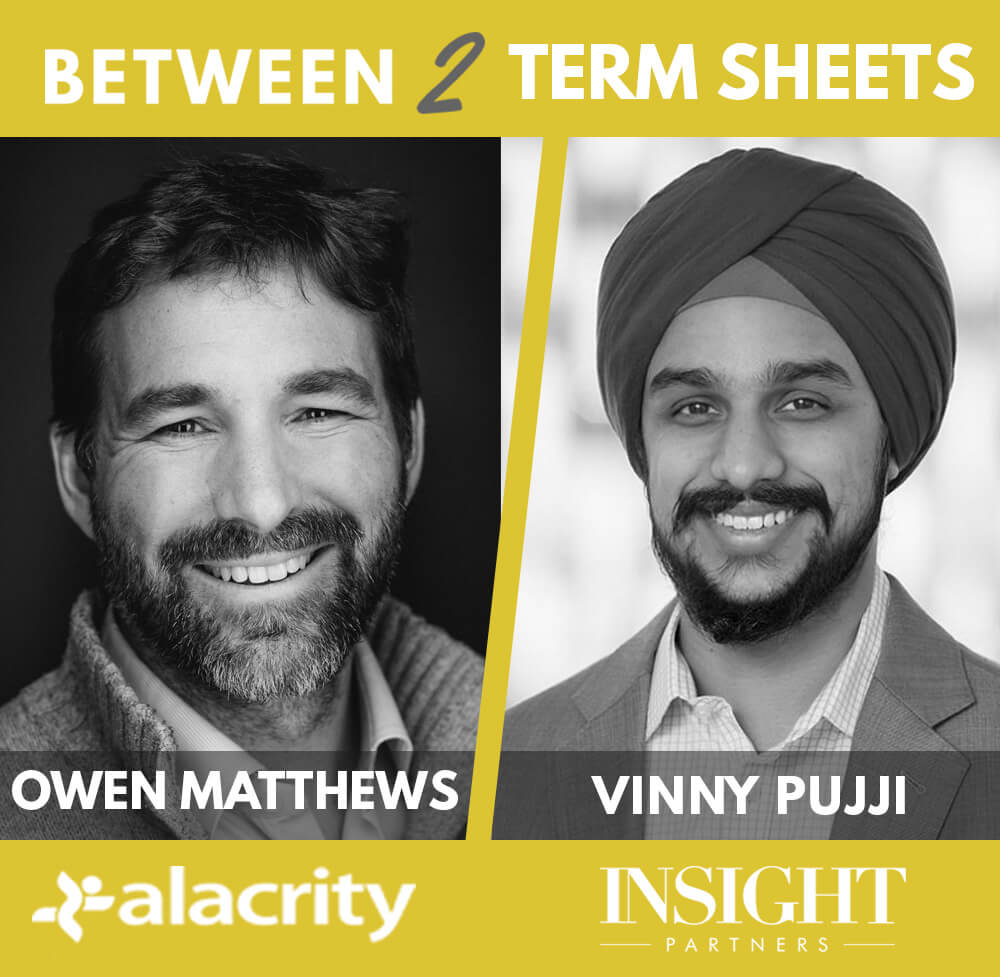 Today’s episode of Between 2 Term Sheets brings us a conversation between host Owen Matthews and Vinny Pujji, Senior Investment Associate at Insight Partners. Insight has over $20 billion of assets under management, has experienced over 40 IPO’s, invested in more than 300 companies, and has completed more than 200 M&A transactions for their portfolio companies.

Listen to this episode to hear Vinny and Owen Discuss:

Vinny Pujji joined Insight in 2015. Prior to joining Insight, Vinny co-founded venture-backed startups in education technology and online payments. Before his time as a founder, he worked in online customer acquisition with a focus on Facebook.

As a student in the Huntsman Program in International Business, Vinny studied Growth Optimization at The Wharton School at the University of Pennsylvania, in addition to earning a degree in International Studies.

Catch up on all of season one of Between 2 Term Sheets here, including conversations with:
* Bruce Croxton of Round13 (and Dragon’s Den)
* Ben Narasin of NEA
* Scott Lake of Hello Ventures (and co-founder of Shopify)
* Senia Rapisarda and Sophia Maizel of HarbourVest
* and many more

You can listen to these podcasts, and more, on the streaming platforms listed below:

Subscribe to Between 2 Term Sheets on your favourite podcast player to avoid missing out on the rest of season two. We have lots of exciting conversations with amazing guests coming up, including:
* Jay Rhind from Vancouver Founder’s Fund
* Margaret Wu from Georgian Partners
* Bobbi Leach of RevenueWire

Owen joined Wesley Clover as a General Partner in 2004 and has invested in Echosec Systems, Encepta Corp., HYAS, Pretio Interactive, Referral SaaSquatch, Tutela Technologies, and Certn, among others.
Prior to joining Wesley Clover, Owen founded NewHeights Software, a pioneer in enterprise unified communication software which was eventually acquired by CounterPath Corporation. With his love of tech and creating opportunities for young entrepreneurs, Owen co-founded the Alacrity Foundation. Alacrity provides an intense incubation environment to prepare graduates for entrepreneurship in the tech industry.

Alacrity Canada is a venture builder that supports driven entrepreneurs. We help create thriving companies & connect them to our global network of expert investors & mentors.
For more articles like this, sign up for our newsletter.

Terminology You Need to Know to Successfully Raise Capital in 2020

When the economy began to feel the effects of Covid-19 in March of this year, many technology companies held off from launching and fundraising. Conferences…