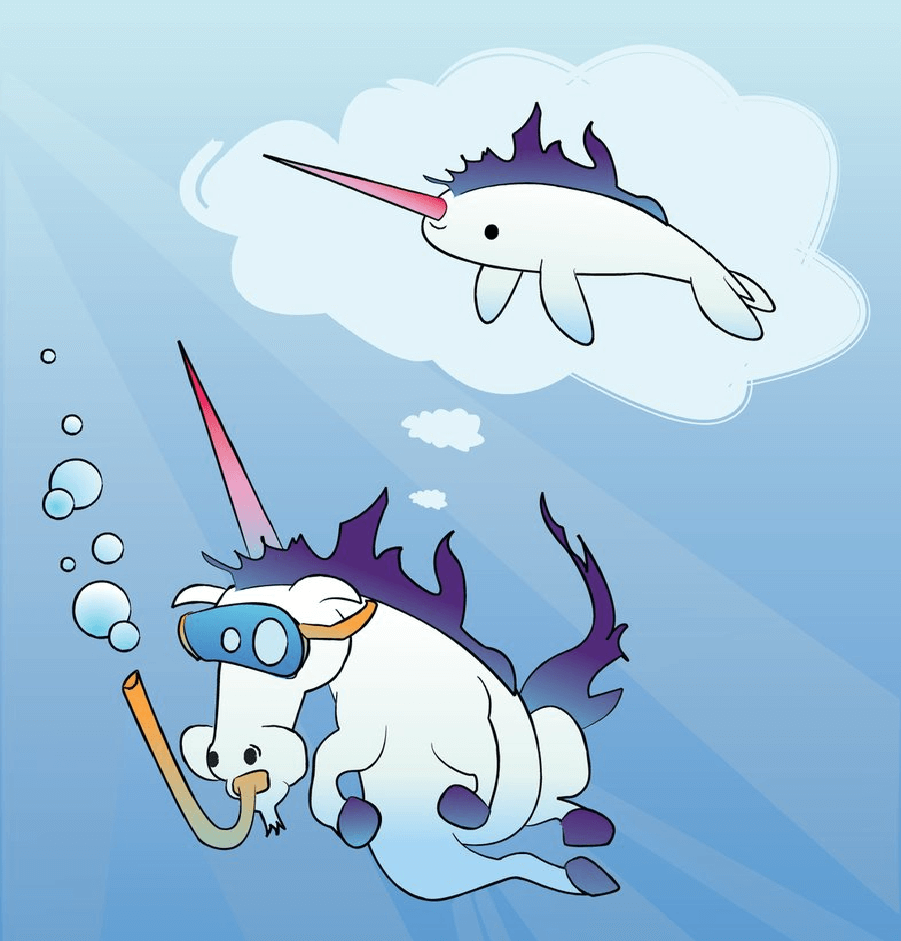 The Rise of the Canadian Narwhal

Such are the conditions in which a Canadian narwhal is born. At least according to the stereotypes generated South of the border.

In venture capitalism, narwhal refers to the Canadian version of an American unicorn: a startup company with a valuation close to or over $1 billion dollars. The term was coined by Cowboy Ventures founder and partner Aileen Lee in 2013, and is meant to signify how unique, elusive and magical these companies are. Regarded as the mecca of technological financial resources, California’s Silicon Valley is the world leader in producing unicorns. More and more Countries now foster their own technology hubs with tremendous potential, however, and Canada is a mighty one to look at.

Who are the Canadian Software Narwhals?

To date Canada has given birth to 5 significant software narwhals. Classifications on unicorn lists tend to be highly debated as the definition of unicorns and narwhals is malleable. To be a unicorn depends on a company’s valuation (which can differ depending on who is assessing the company’s worth), or whether the company is private or public (some argue only private companies should qualify, while others say stock-market valuations of public companies are just as valid). The following 5 Canadian software companies, nit-picking aside, have made the list in one respectable publication or another.

Founded in Vancouver by Alexander Fernandes in 2004, Avigilon surpassed the billion dollar mark as a public company in 2013. Avigilon claims to define the future of protection through innovative HD surveillance solutions. The founders found their way to success without any capital from US venture capitalists. As such, it hasn’t made its way on CB’s list of venture backed unicorns.

Shopify was founded in 2004 by Tobias Lutke, Daniel Weinand, and Scott Lake (newly christened Victoria resident) as a response to the lacking state of e-commerce infrastructure they found at the time when trying to launch their snowboard shop online. It took only 3 rounds of funding before they were able to raise $122 million dollars and become Ottawa’s fastest growing company in 2010. By the time they filed for an IPO in 2015, Shopify was valued at 1.27 billion dollars. Today Shopify’s market cap is over $10 billion.

Hootsuite was launched in 2008 (as an app called Brightkit) by Ryan Holmes in Vancouver, British Columbia. 10 million users in over 175 countries, including 744 of the Fortune 1000 companies were on Hootsuite by 2015. The app allows users to manage their various social media accounts all from one place. Hootsuite is integral to the Vancouver startup ecosystem and has hired over 1,000 employees. Though some speculate as to whether it truly held a valuation of 1 billion in 2014, Ryan Holmes said on Twitter that “Hootsuite is definitely north of $1b today.”

Founded by Ted Livingston in 2009, Waterloo-based chat app Kik Interactive is a mobile-first smartphone messenger application with a built-in browser. Kik joined Shopify on the list of Canadian narwhals in 2015 after receiving a $50 million dollar investment from Chinese Internet giant Tencent. Kik is set on becoming the next WeChat, which allows users to browse e-commerce stores, read the news, pay their bills and order taxis, all alongside their chat and messenger interface. Kik’s userbase consists primarily of 13–24 year old users. About 40% of US teens use the app. Kik believes this young adoption is shaping their users habits and preferences early on, and will play a decisive role in its future.

Slack, a workplace collaboration software tool to increase communication and productivity among teams (which coincidentally has also become the world’s best place to find and share gifs) was born in 2009 as Tiny Speck Media. Slack was Stewart Butterfield’s second attempt at creating a game company that turned into something very different than what he intended. His first attempt turned into what we now know as Flickr. Valued at $3.8 billion today, Slack has raised over $340 million in venture capital and has more than 2 million daily active users, 570,000 of which are paid customers.

Lots of debate occurs as to whether Slack should be considered an American or Canadian company. Though the first Slack office opened in San Francisco in 2014, the product and design was curated in Vancouver and Victoria, causing many proud Canadians to feel that the application is truly homegrown. Butterfield himself says that the San Francisco office was opened to focus on investors and executive recruiting, and that the Vancouver office is his personal favourite, adding that “[t]he San Francisco office has a great location. But it wasn’t entirely built out by us, so it’s much less us”.

Canada ranked #15 on the 2016 Global Innovation Index, and has the potential to rank much higher in the near future.

The Canadian government has pledged to invest over $800 million into tech communities all across Canada over the next four years. The focus will be on supporting accelerators that provide low rent offices and mentorship to companies. This “innovation agenda” is sparked by a need to transition from resources toward resourcefulness, and, coupled with the support of successful individual Canadians, has already supported the rapid growth of tech hubs across Canada.

Canada’s most prominent technological companies hail from its most densely populated area: the Toronto-Kitchener-Waterloo corridor in Ontario. The Canadian Innovation Exchange (CIX) released a list of Canada’s top IT companies in 2016 which showed 70% from the Ontario area. Often called the “Silicon Valley of the North”, the area boasts multiple accelerators including MaRS Discovery District in Toronto and Accelerator Centre in Waterloo.

Ottawa is known for its part in the worldwide race to build the infrastructure of the internet in the mid 90s. Local companies like Nortel Uniphase, Cognos, and Mitel led the way. After the 2000 dot-com bubble burst companies either shut down or were bought at a fraction of their cost. The talent, infrastructure and technology that fueled those very companies, however, has since been recycled and amplified. According to Pitchbook, Ottawa has seen over $345 million investment dollars flow through the IT industry since 2013, and had 11 venture capital deals over $10 million dollars in the last three years. Furthermore, $893 million worth of exits in IT companies from 2011–2015 were in Ottawa.

Accelerators such as L-Spark and Invest Ottawa provide support and mentorship to the many companies that are now positioning Ottawa as a SaaS powerhouse.

Montreal is home to McGill University and several successful startups. It boasts a lively European culture with international fare and affordable living prices. According to the Canadian Venture Capital and Private Equity Association, venture capital firms invested $295-million in Quebec in 2015. Montreal hosts Canada’s largest conference for startups, Startupfest, and has a significant leverage when it comes to AI companies. Microsoft announced that it will double it’s investment in AI research in Montreal, and recently acquired natural language processing and AI startup Maluuba.

Accelerators such as BlindFerretLabs and Year One Labs help provide a great foundation for startups in Montreal.

On the West Coast of Canada Vancouver and Victoria take centre stage as leading tech hubs.

Thousands of entrepreneurs from around BC flock to Vancouver (the birthplace of Hootsuite and Avigilon) for investment opportunities, and to take advantage of the healthy ecosystem of government supported accelerators including Launch Academy and Wavefront. Rising prices, however, are seeing many migrating over to Victoria, just a movie-length ferry ride away.

Victoria has earned the nickname “Tectoria” and boasts several successful companies in the digital customer acquisition sector. According to VIATEC, about 900 tech companies populate the city, employing a workforce of about 20,000 and generating over $4 billion in economic impact annually. Accelerators like Alacrity Canada and VIATEC offer capital (or assistance in applying for capital), networking, and mentoring opportunities to startups.

The community feel of smaller cities like Victoria drives both entrepreneurs seeking a collaborative investment community, and investors looking for a break from the big city.

If you give a narwhal bacon…

Both American and Canadian venture funds are on the lookout for the next Canadian narwhal. The Canadian Venture Capital & Private Equity Association’s (CVCA’s) 2016 report showed that venture firms pumped $838 million into Canadian companies in Q1 of 2016 – nearly double the amount seen during the same period in 2015. Chief executive of the CVCA Mike Woollat says that American firms are increasingly venturing up north to take part in Canadian deals. In response, more and more homegrown venture capital firms are popping up in Canada.

Though Canadian venture funds are great at supplying #seedbacon, not many can write large enough cheques to get companies through the later stages of development, let alone exit at billion dollar valuations. At times, this embryonic stage of domestic venture capital means Canadian companies feel a need to move to bigger playgrounds. It is also common for American companies with large financial backing to acquire Canadian companies that are doing well.

Regardless of these challenges, it is clear that the hunt for the next Canadian narwhal is on. The dollar investment into venture capital-backed Canadian companies totalled U.S.$1.7 billion in 2016(which matched 2015 investment despite a global 23% decline).

Startup ecosystems sprouting and flourishing across the nation are ensuring prime breeding grounds for future narwhals. This, coupled with government support (through funds, tax credits, and trade missions) and successful entrepreneurs wanting to “pay it forward” is helping to spur the next wave of innovation in Canada.

However, despite this support, the fate of this development still relies on market trends and venture capitalists with deep pockets.

While it’s difficult to discern where a Canadian narwhal might break through the ice next, the Impact Centre at the University of Toronto’s most recent Narwhal List contains 50 of Canada’s most financially attractive private tech companies. Whether or not the Impact Centre’s predictions are accurate, it’s easy to see that there is more than enough opportunity to for billion dollar valuations Canada.

After all, unlike unicorns, narwhals aren’t mythical creatures.